STAT or Signal Transducer and Activator of Transcription is a biological process in our normal cells that is as biologists like to say 'highly conserved'. At the Moffitt Cancer Center, the work of researchers funded by the NIH has led to the important discovery that certain compounds inhibit STAT at the phosphorylation, dimerization and also at the DNA binding site. Unlike the trans-membrane activated receptors which are 'up-stream' from STAT, STAT is a biological function that works ultimately on the DNA.

This has led some researchers to worry about the toxic effects of STAT inhibiting compounds and frankly it is a justified concern. STAT is an important step in the reproduction of individual cells in our bodies and because it is highly conserved it is turned on very few times in a cell's life. Mostly during the cell division stage. 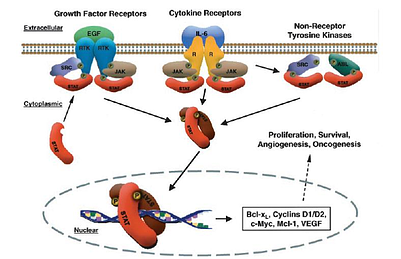 Cancer cells however, especially when they are metastatic or rapidly reproducing, have been shown to have STAT turned on all the time. So in cancer therapy, it is always a treatment that works specifically on cancer cells because they are rapidly reproducing or they are continually robbing nutrients from normal tissue. STAT inhibitors offer promise for treating metastatic cancers that are essentially run-away cancer cell reproduction in combination with standard chemotherapy treatment. Moffitt researchers have shown STAT to varing degrees of activation in over 23 different cancer types, including breast, pancreatic and neural cancers.

The reason that the Moffitt is so interested in STAT3 inhibiting technologies is because we also have the ability to test for the activation of STAT3 in cancer cell types. Along with a person's cancer cell genetics as well as their personal ancestral genetics, tailoring a treatment regime for the patient with lower toxicities and higher efficacy is one of the major goals of our program. That is also why the Moffitt Cancer Center is also an investor in GLG Pharma.

In these difficult economic times, GLG Pharma has found many new sources of funding to develop its STAT inhibiting technologies so that they may begin clinical trials as soon as possible. It is clear to all of us that work in biotech and pharmaceutical companies that there has to be a better way to fund the development of these important diagnostics and therapeutics. All of our current animal studies have shown that our STAT inhibitors have low toxicities but inhibitory effects on cancer growth and when combined with traditional chemotherapy could provide the knock out punch to the metastatic cancer cells. GLG has received support from local, State and Federal agencies to help develop its products and technologies. If you want to learn more about GLG, contact us at GLG Pharma.